From I-85 - Take the US HWY 27 Exit and head north 500 ft towards Route 16. Turn right on Route 16 and head east towards Griffin. At the intersction of W Poplar Street, merge onto W Poplar and head east. At S 12th Street, turn right and head south one block. We are just ahead on your right.


Located 53 miles south of Atlanta, Griffin Georgia is home to approximately 10,000 residents. Situated in Peach County, Fort Valley is part of the greater Macon metropolitan area. Originally founded in 1836,the town's name has been a long-time mystery as it has never had a fort. Historians believe that the name was mistakenly changed in a transcription error when the post office was named. The area was originally thought to have been called Fox Valley.

Griffin, GA offers residents a good quality of life with historic charm. As home to the original Southern Pit BBQ and the invention of peanut butter, the city of Griffin has also been filmed within several notable shows and movies including The Walking Dead, Driving Miss Daisy and The Hunger Games. Visitors to the area enjoy touring the popular Griffin Historic District, the stately homes as well as the various cultural museums celebrating the city's cultural past.

As a resident of Griffin, there are lots of familiy-friendly activities to enjoy including movie theaters, a rollerskating rink, recrational bike paths, bowling, the Mega Maze and the famous Doc Holliday Museum. 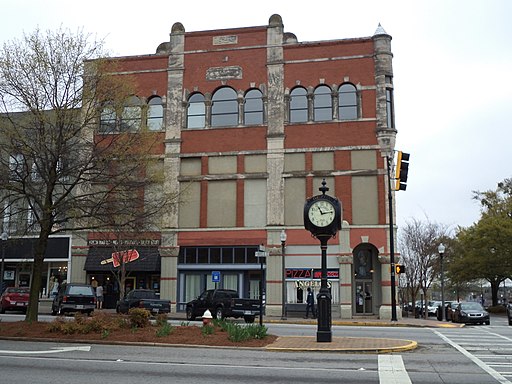 
Site by Professional Web Designs
Accessibility Policy
Poplar Grove is committed to ensuring that individuals with disabilities can access all of services offered by Poplar Grove through its website. We utilize guidelines issued by the Web Accessibility Initiative (WAI) of the World Wide Web Consortium (W3C) to implement functional improvements and also work to ensure that all content satisfy the criteria set forth in WCAG 2.0. If you use special adaptive equipment and encounter problems when using this website, please call us (678) 688-5388.